Since its establishment in 1989, major Aeon Group companies have distributed 1% of there pre-tax income to the Aeon 1% Club to develop a variety of initiatives centered on “environmental conservation”, “international cultural and interpersonal exchange and development of human resources” and “promotion of regional culture and society.” 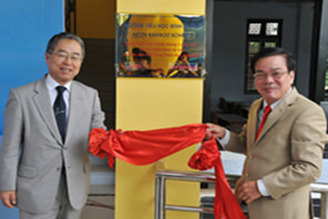 In partnership with the Japan Committee for UNICEF, Aeon is supporting construction of schools in Asian region where they are needed. We collect donations for the School Construction Support Project from customers in stores and other facilities operated by Aeon Group companies across Japan. Through 2009, we helped construction of a total of 326 schools in Cambodia, Nepal and Laos, giving around 230,000 children a chance to go to school.

Since 2008, Aeon in collaboration with our partner Fashion Service NANIWA, has been collecting PET bottle caps from our customers at our stores. The caps, as recyclable resources, are sold for cash that is (in turn) contributed to three international organizations that support children in Asia’s developing countries.

In fiscal 2012, cash from 341,160,000 bottles caps was donated to three organizations. The funds provides vaccines, nutritious food, and school supplies to children in Vietnam, Myanmar and other countries.

The three international organizations are: Japan Committee Vaccines for the World’s Children (JCV), Save The Children Japan, Plan Japan.

The Japan – China High school Student Exchange Program started in response to the Teenage Ambassador Program in Beijing, China in 2009. Through fiscal 2011, 217 Japanese and Chinese high school students have had a chance to deepen cultural ties through arts and sport exchanges.

Young people lead the way on understanding diversity. The Asian University Students Environmental Forum started in 2010. It provides an opportunity for university students in the Asian region to gather and foster mutual understanding through discussion and to share observation on social issues. For the 2nd forum, in fiscal 2011, 30 university students from Japan, Thailand and Vietnam gathered in Ho Chi Minh City, Vietnam to discuss the theme “ The Environment and the Economy” The forum for 2012 took place in Japan with around 100 participating students from 04 countries – Japan, Vietnam, Thailand, and Indonesia.

The Aeon Scholarship Program was established in 2006 to provide financial support to Asian students in Japan and in Asian countries, leaders of the next generation in Asia.

From fiscal 2013, Aeon plans to add universities in Cambodia and Myanmar.

Learning the diversity of values through discussion about environmental issues.

Aeon Asia Eco-Leaders (formerly Asian University Students Environmental Forum) was initiated in fiscal 2010 to provide opportunities to University Students in the Asia region to gather and cultivate mutual understanding through discussion and observation of conditions outside their countries.

In fiscal 2012, for the 3rd year of program, students from Japan, Thailand, Vietnam and for the 1st time – Indonesia, met at Kasumigaura, at Lake Biwa, to discuss “water and economy”. They also had the chance to visit the traditional culture of Japan in Kyoto, and deepen their understanding of the diversity of values.

In fiscal 2013, the event will be held in Jakarta, and Malaysia will be added as a 5th participating country.